Lecsó ravioli – In case we are already bored with plain lecsó


In case we are already bored with lecsó which one can never be bored with, although it is still lecsó.

(Lecsó is a traditional Hungarian thick vegetable ragout, it is very popular during the summer. More details.) 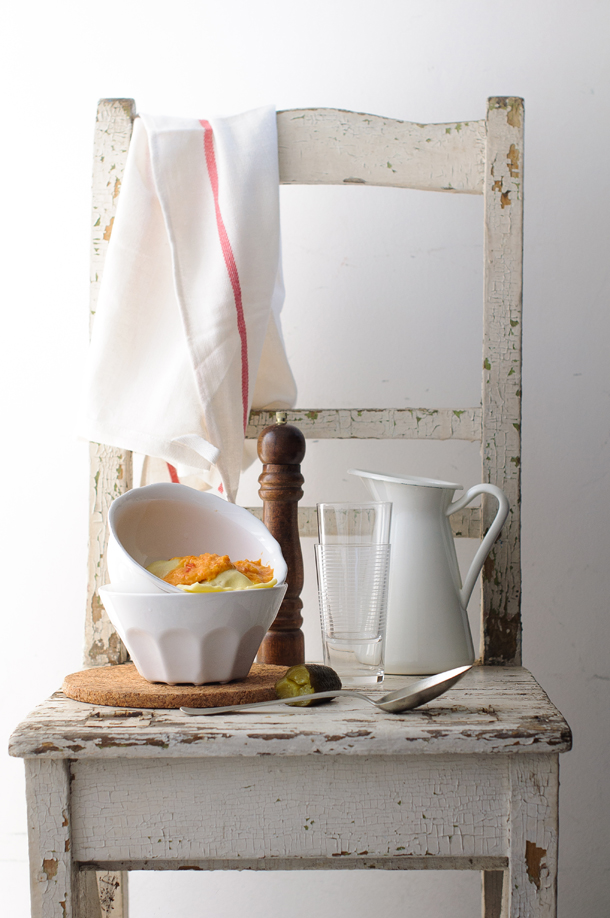 1. Pour the flour into a bowl and mix it with the salt. Make a well in the centre and crack the eggs into it. By moving the fingers in circles mix the eggs with the flour gradually. Knead the dough until smooth. Wrap the dough in cling film and put it in the fridge for half an hour. Roll the dough with pasta machine until thin, then make pieces of ravioli by putting a slice of sausage in each of them. Cook the ravioli in salted, hot water for three minutes.
2. For the lecsó sauce melt the fat of the bacon, and then fry the pieces of bacon until crispy and browned. Remove them from the pan.
3. On the bacon fat fry the onion slices. Stir in the ground paprika and fry it for some seconds with the onion. Add the pepper, tomatoes and the crispy, browned pieces of the bacon. Cook the ragout for 20-30 minutes over moderate heat, stirring it occasionally. Remove from the stove, if it is ready.
4. Mix the eggs in a bowl, and then gradually incorporate some tablespoons of hot lecsó ragout to the eggs, mixing it carefully after each addition. Pour this mixture to the lecsó ragout. Stir it for 1-2 minutes until it thickens. Blend the sauce with an immersion blender.
5. Mix the ravioli with the lecsó sauce and serve it with fermented cucumbers. 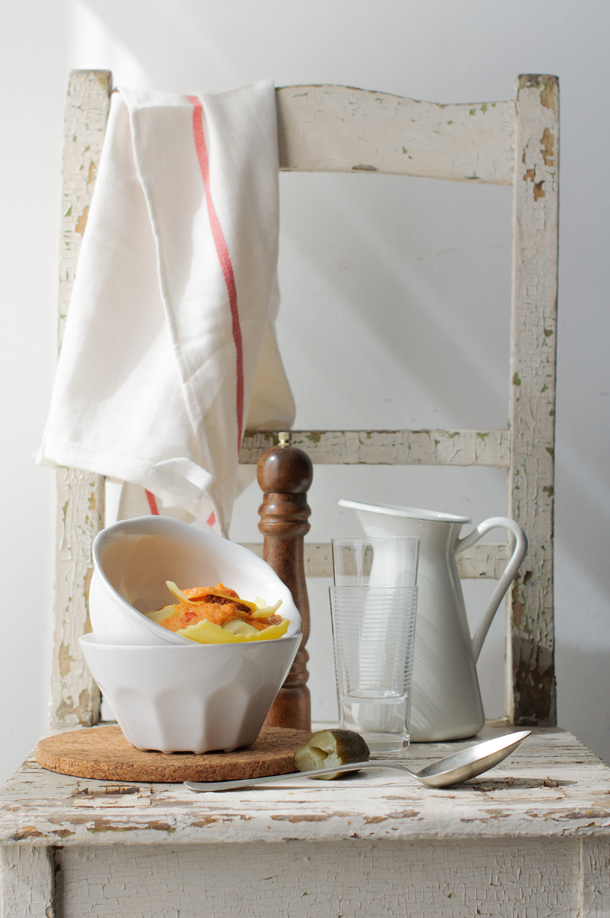 Email ThisBlogThis!Share to TwitterShare to FacebookShare to Pinterest
Labels: pasta, with vegetables


The maddening success of the brown ale brownie might as well be followed by this one. 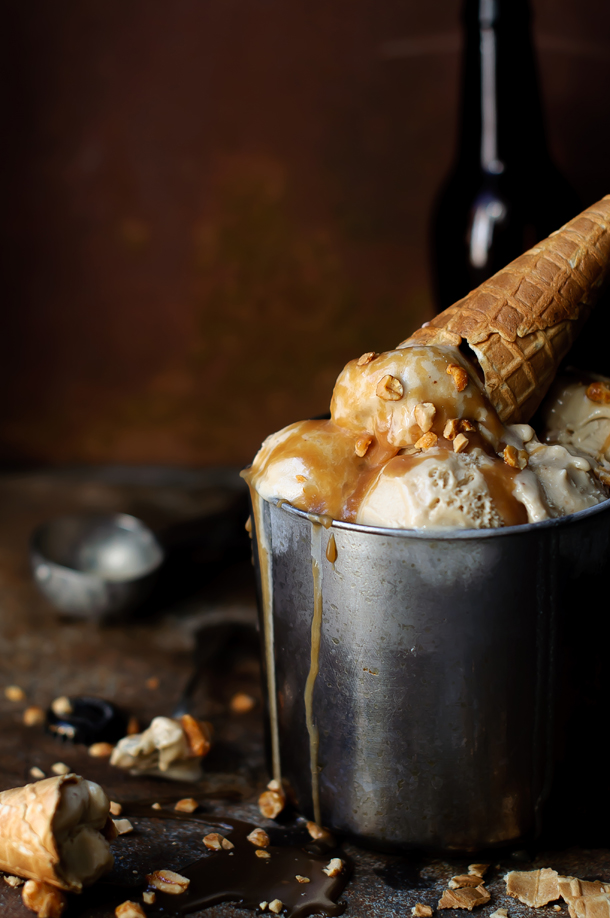 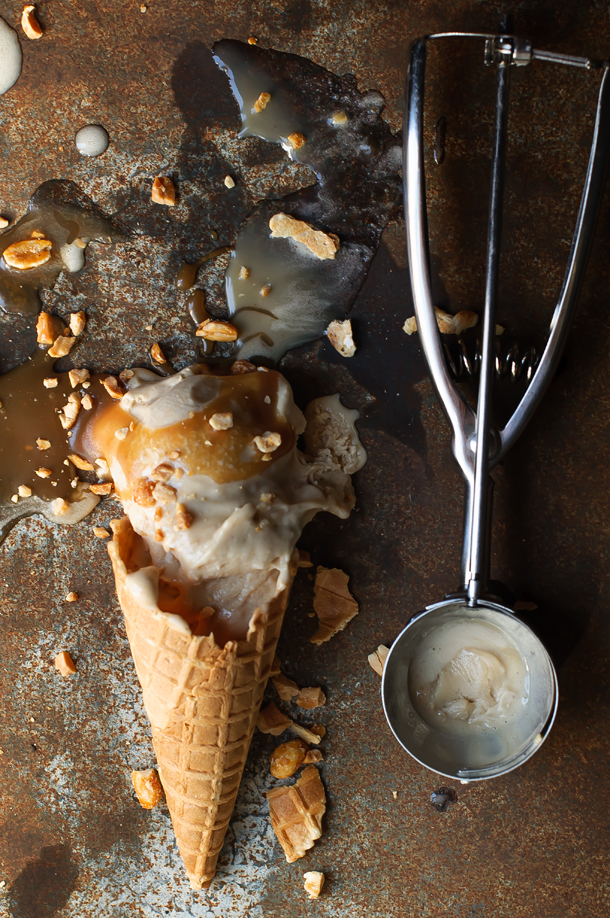 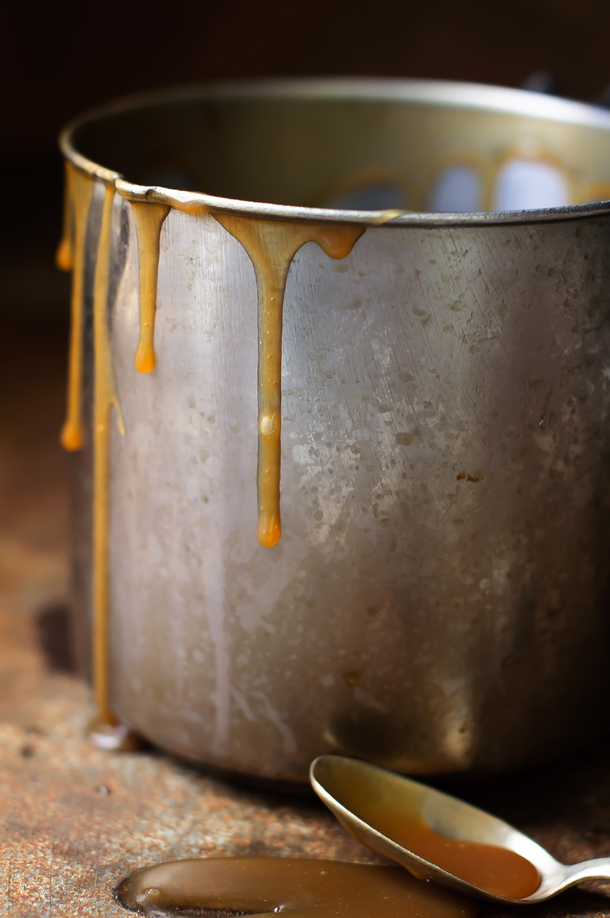 Preparation:
1. Brown the butter for the ice cream.
2. Boil the brown ale and cook it to syrup-like consistency.
3. Mix the egg yolks with the sugar, add the milk and cook the mixture over a bain-marie whisking constantly for 10-15 minutes until it thickens. Add the browned butter and the ale syrup as well. Put it in the fridge and let it cool completely.
4. Whip the whipping cream and fold it into the custard, then pour it into the ice cream maker.
5. For the salty caramel sauce caramelize the sugar on the butter, then add the hot milk and stir it until the sauce becomes smooth.
6. Serve the ice cream with the salty caramel sauce and honeyed peanuts on top. 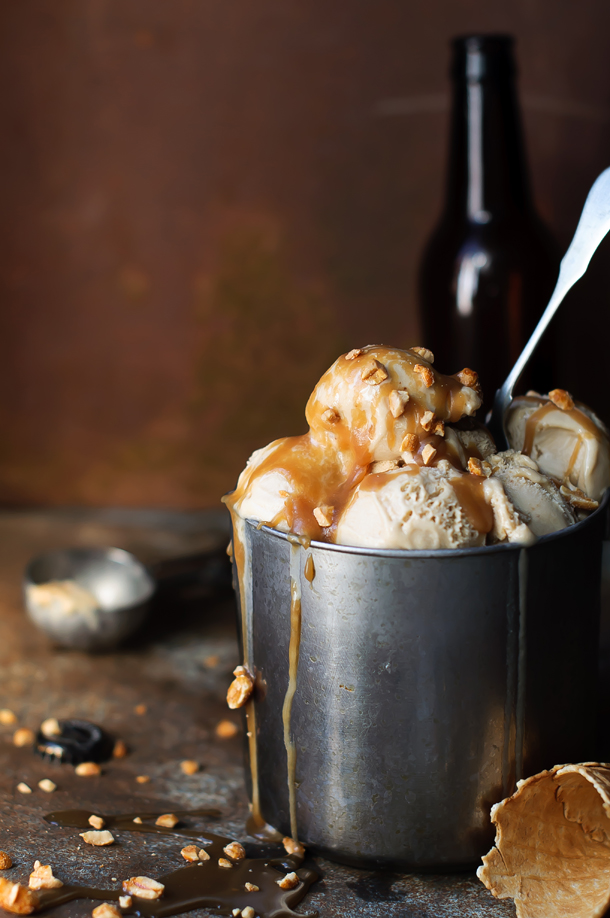 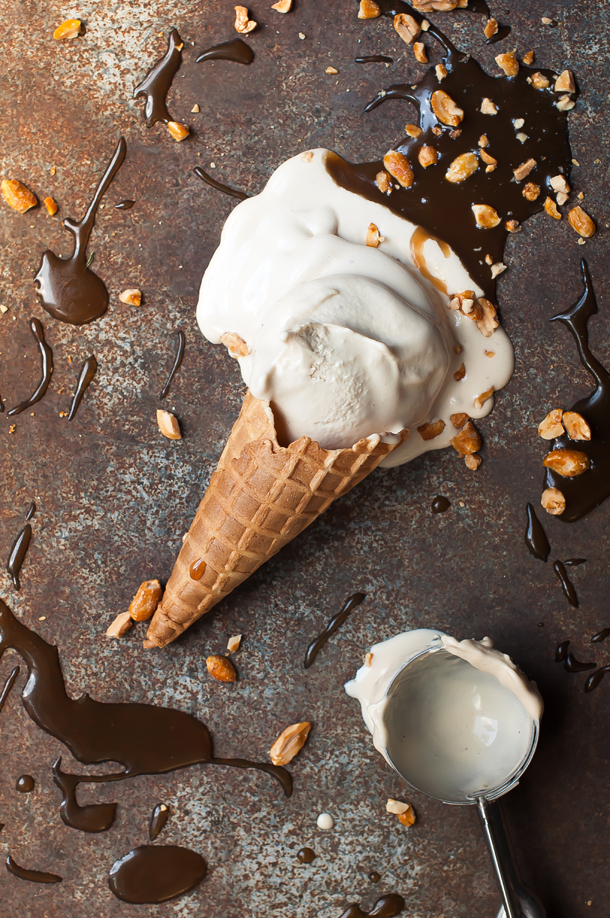 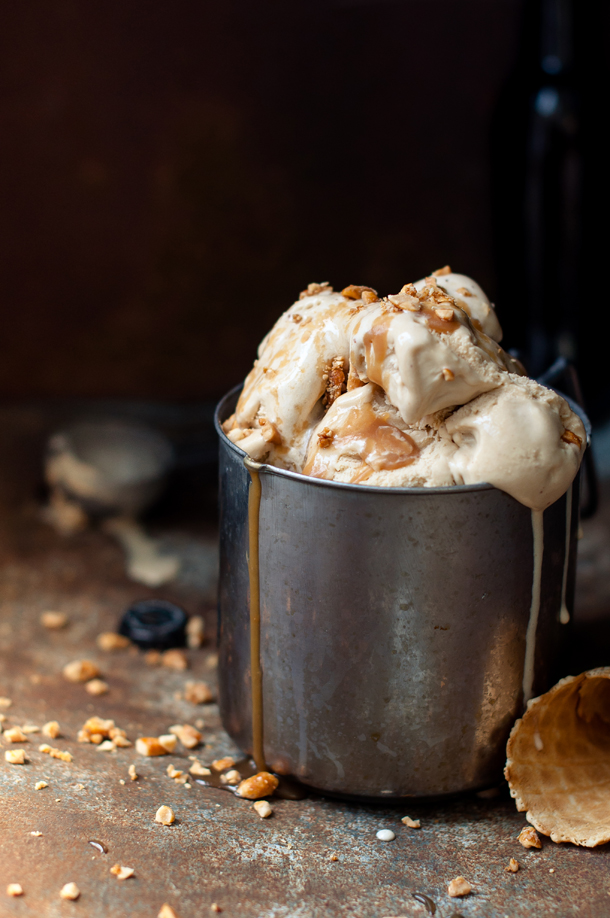 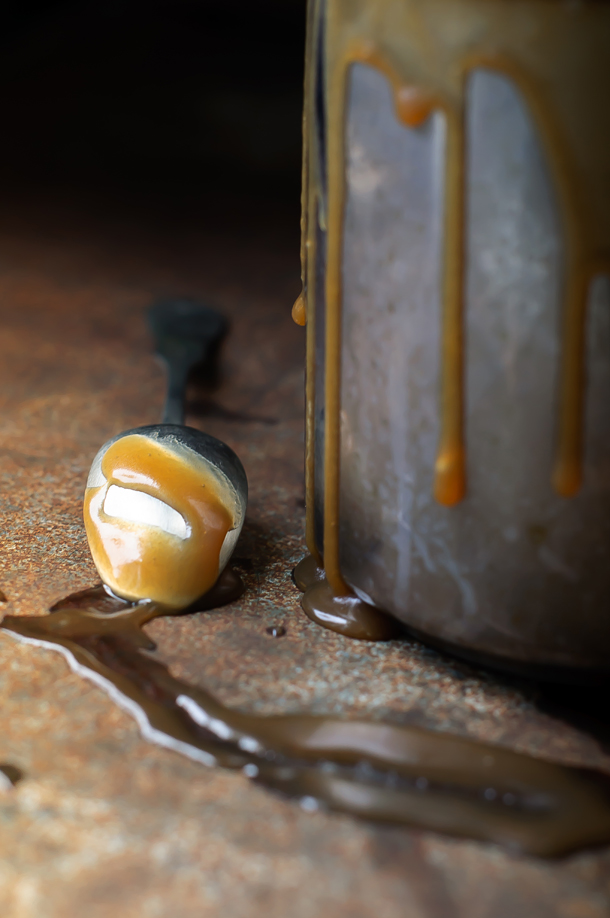 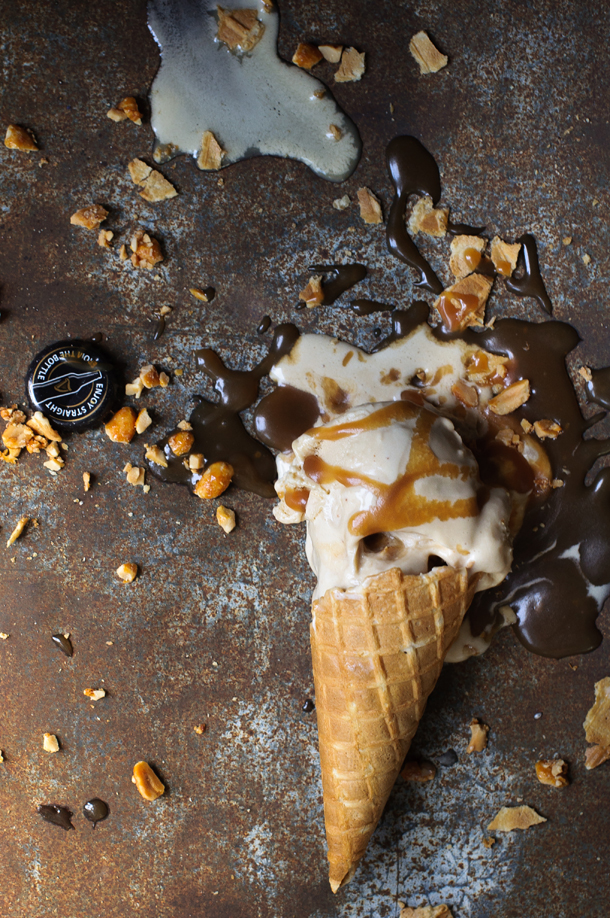 My name is Beatrix Horváth-Gallai. First of all, I'm very glad that you have found my blog. I'm an architect living in Hungary, and I have fallen in love with cooking and photography. Currently I'm at home with my two little children.